The Nagorno-Karabakh Conflict and the powerful documentary talking about it 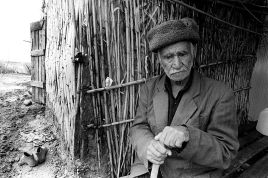 On a cold windy evening, a bunch of people rush along a snowy mountainous terrain. They navigate through a bunch of jeeps and a herd of sheep with a sense of urgency evident on their faces and in the music that signals an incoming danger. An old frail woman carries a child on her back. Slapping her chest, she yells in distress, “Hurry up, My God, our days are disastrous.”

Disastrous may not even begin to describe the plight of the thousands of internally displaced Azerbaijanis in light of a bloody war. However, this opening scene of the Azeri documentary ‘From Tent Encampments to New Settlements’ is a powerful beginning to the conversation around the continuing ramifications of the Nagorno-Karabakh conflict — that has largely been missing from mainstream media narratives of the current times.

The ethno-territorial strife between Azerbaijan and Armenia over the disputed region of Nagorno-Karabakh and surrounding areas, though, finds its roots in the politics of Stalin in the early 20th century; the present conflict began in 1988 when the Karabakh Armenians demanded that Karabakh be transferred from Soviet Azerbaijan to Soviet Armenia. As the conflict turned into a deadly war and Azerbaijan struggled for independence, 230,000 Azerbaijanis were expelled from Armenia, and 47,000 people were displaced from the territory of NKAO, along with 700,000 from the surrounding districts.

As aid flew in from international humanitarian organisations such as Red Cross, UNHCR etc to help the government of Azerbaijan in accommodating the IDPs and their needs, thousands of people were settled in tents and wagons after the ceasefire signed in 1994. However, all these camps were abolished in the country in 2007 to shift the IPDs into new housing settlement schemes. The transfer and assimilation, however, has not been completely smooth and peaceful.

IDPs are excluded from land privatisation, lack employment opportunities and social cohesion with other local populations, thus facing marginalisation. In the present day, Azerbaijan has one of the highest numbers of internally displaced persons (IDPs) per capita in the world, present in all of its 76 administrative districts.

Tracking this journey of the IDPs from tent camps to new apartments, From Tent Encampments to New Settlements’ Avaz Hasanov tackles the important subject of aid and rehabilitation. He not only looks at the housing conditions, but also explores the role and the efficiency of the government and international organisations. The film, shot in 2019, employs the use of talking head with archival footage and powerful narration, describing the cause and consequences of the conflict, highlighting personal stories and the impact of war on the region.

The film is produced by Baku Film School Production and Humaintar Studies Public Association. In a blog post put out by the latter, Avaz Hasanov comments on the vision of the film. He states, “Although there is a wide audience for such films, unfortunately, the international audience is not familiar with the image of IDPs living in Azerbaijan in difficulties. At the same time, the international community is not sufficiently aware of how a small state like Azerbaijan has managed to solve the problem of about 1 million IDPs.”

The diverse and politically charged student body at SOAS will certainly merit from this documentary. The admission to the screening is free. Online registration is preferred.

Devyani Nighoskar is a 24-year-old SOAS Digital Ambassador from India. A former journalist, she is currently pursuing her M.A in Critical Media and Cultural Studies. You may check out her work on Instagram @runawayjojo